The new version of Screen Ruler Professional is now here. This is major update and I would advise all users of previous version to upgrade. Most of the improvements in this revision are upon user requests. Here is what’s new:

— New setting added: Ctrl+Shift+Y / Minimalistic Readings — as the name shows, this option will show the height/width readings in minimalistic way (just the numbers) 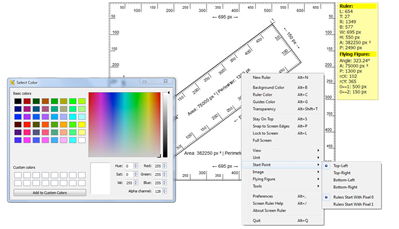 — Request Feature system launched — from now on it should be even easier to send me your feedback. Just click the Request Feature menu item and you can be part of the future development in a transparent way

— “Inverted Alt/Cmd Behavior” option added to the Flying Figures menu– useful when working with figures, this option will switch the default behavior of the Alt key when resizing.

— “Flying Ratios” added — much like Flying Figures, but for Aspect Ratios (16:9, 4:3 etc.) This feature should be useful for anyone who needs to work with videos (for example — it will be really easy to see what will get cut when you transform 16:9 video to 4:3, or vice versa)

— Pixel-Based Units (not calibrated) added — useful when you don’t want calibrated units (the regular ones) but want to say how many pixels your unit contains (for example — if you want 1 cm to be exactly 100 pixels, you just go and define the unit as “Pixel-Based”. It will not be calibrated and thus useful when the actual size is let’s say a zoomed photo, medical scan or something like that.

To download the new version — just use the buttons below:

PS: One final note — the price will stay at it’s current level for very few days only. After more than six months it’s time now to change the early bird price to the regular one so, for anyone who wants to save $5 bucks — be sure not to think far too long 😉